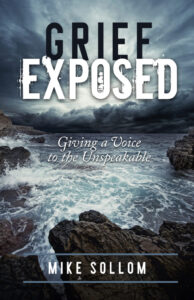 Book: Grief Exposed: Giving a Voice to the Unspeakable

In those dreadful early days and nights after Mike’s son died, the only thing he could think to do, when he collided with the morbid memories of his son’s suffering and the unbearable ache of Jim’s absence, was to find some way to describe how he was feeling. So, he found a spiral-bound notebook and wrote. And wrote and wrote and wrote.

Mike believed if he could assign words to the grief and pain, he might find a way to endure them. If he could bring those words into the light, it might make the whole thing bearable. Many of the words were dark and raw and angry and did little more than chronicle ten interminable years of wrestling and railing. But there were island of hope and yes, there were words of light.

Through the gentle and generous encouragement of friends, Mike came to wonder if those words of light, which he discovered in the darkest of nights, might also help someone else endure the unbearable realities of their grief and loss—that they might become someone’s guide. If they could, then how could he keep those words buried in a stack of spiral-bound notebooks?

Grief Exposed by Mike Sollom was a well-written book. I give it five stars. However, the book is not what I expected. Truthfully, I am not sure what I was expecting. Having lost a child and all the hope that goes along with that and losing a parent to an unforeseen tragedy, I suppose I was seeking solace. A book that would finally help me move past the pain I felt.

Grief Exposed was not that book of comfort, but instead, a book of healing that I didn’t realize I needed.

My daughter died from a fatal fetal anomaly 20 years ago, and my stepfather was killed mercilessly in 1987. I never received counseling for the traumas. Other people were falling apart around me, so I had to be strong for everyone else. The problem with being strong for everyone else is you stuff the pain down deep and never really deal with it.

What no one ever tells you is that grief will last a lifetime. Sure, the pain dulls as the years go by, but the loss felt never does. Initially, reading Grief Exposed was painful. In the first couple of pages, I discovered that it is not a step-by-step guide to moving through grief. Instead, reading the book was a trigger to the deep pain I stuffed down for years. I had to read the book in short increments to give myself time to recover after each chapter. Initially, I thought the book was too much, but halfway through, I felt differently. I was changing with every chapter I read. To my surprise, I was finally releasing the emotions that kept me stuck for years. I cried, screamed, laughed, and cried some more. I no longer had to be strong for everyone else. It was oddly wonderful.

The biggest takeaway from reading Grief Exposed is that it is not a guide to grief but a healing book for those who have experienced loss. It takes you through the ugliness of grief but with a purpose, and it provides others a glimpse into what grief looks like from someone in the midst of it. I appreciate the courage the author had to share his notebooks in the form of this book. Reading it turned out to be an incredible blessing.

Note: I reviewed a complimentary copy of this book, which I received through Celebrate Lit. I was not required to write a positive review, nor was I compensated for sharing my thoughts. I am disclosing this per FTC regulations. 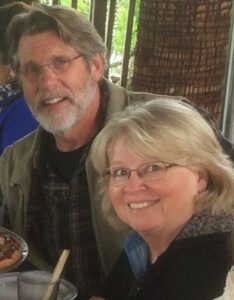 Mike Sollom is a hard-working, Midwest-born, farm boy married to his high school sweetheart. He and LuAnn have raised four children.

In the consequences and aftermath of their son’s death, Mike and LuAnn lost nearly everything. They are “houseless” and living the challenging and adventurous life of modern-day nomads and pilgrims. You can follow their journey at www.mikesollom.com.

My “One Day” Has Come

“One day you will tell the story of how you overcame what you went through and it will become someone else’s survival guide.”

I don’t know who wrote that. I saw it on a poster with no credit given. But it’s a good description of how this book came to be and what I hope will be its outcome—its path and its purpose.

Here’s the truth of it: I didn’t set out to write anything. Much less a book. I still don’t see myself as a writer. Yet, here I am.

My first-born son died of cancer.

In those dreadful early days and nights after Jim died, the only thing I could think to do—when I collided with the morbid memories of his suffering and the unbearable ache of his absence—was to find some way to describe how I was feeling. So, I found a spiral-bound notebook and wrote. And wrote and wrote and wrote.

I believed if I could assign words to the grief and pain, I might find a way to endure them. If I could bring those words into the light, it might make the whole thing bearable. Many of the words were dark and raw and angry and did little more than chronicle ten interminable years of wrestling and railing. But there were islands of hope and yes, there were words of light.

Through the gentle and generous encouragement of friends, I came to wonder if those words of light, which I discovered in the darkest of nights, might also help someone else endure the unspeakable realities of their grief and loss—that my voice might become someone’s “survival guide.” If so, then how could I keep those words buried in a stack of spiral-bound notebooks just because I didn’t see myself as a writer?

I’m taking a huge risk by plunging back into that bottomless pit of loss and dragging myself through that incessant slog of sorrow once again, unclear of the worth or usefulness of the outcome. I’m exposing my most intimate grief, with all its messiness and vulnerability, uncertain of its reception or the consequences it will bring. I’m giving a voice—my voice—to the unspeakable pain of death and suffering, unaware of who will hear me or how they will respond. Yet, in the face of all of that, I’ve decided it’s a risk I’m willing to take.

“One day you will tell the story of how you overcame what you went through and it will become someone else’s survival guide.”

I guess my “one day” has come.

For Him and My Family, April 20

Because I said so — and other adventures in Parenting, April 27

To celebrate his tour, Mike is giving away the grand prize of a signed copy of the book!!

Bride of the Rockies

Book: Bride of the Rockies Author: Angela Breidenbach Genre: Historical Romance Release date: January 1, 2022 For botanist, Bettina Gilbert, mining is an offense against God’s green earth. With the shortage of women in Montana,

Stalled Writing Projects There are many reasons for stalled writing projects. To find out what may be causing you to be stalled, you need to ask yourself the right questions. In this episode, I walk

Author: Jeannine Bennett Genre: Christian Nonfiction, Women’s Bible Study Format Release date: December 12, 2021 What do you do when you realize God is love? Do you remain stuck in a life of bondage,