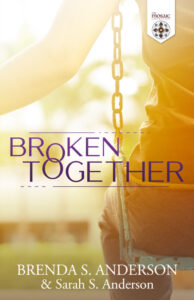 How do you persevere when you have no more will to fight?

Jennifer and Chad Taylor had dreamed of opening a coffee and cocoa shop since before they said, “I do.” When Chad is sent to prison for murder despite claiming innocence, that dream—along with their family—is shattered.

After years of fighting for Chad’s release, Jennifer finally breaks free from her shame, anger, and hopelessness, and forges ahead with the dream the two of them once shared. With the help of their college-aged twins, she begins to move forward.

When their lawyer arrives with news of evidence that may prove Chad’s innocence, a strange mixture of emotions overtakes her. Does she want Chad to return home? He isn’t the same man he once was, and she certainly isn’t the same woman. She’s worked hard to piece the remnants of their family back together, and his coming home could fracture the family once again.

Broken Together is a fantastic book. Authors Brenda and Sarah Anderson hit this book out of the park, so to speak. The book is an easy read but hard to put down once you pick it up. The story was realistic and provided insight into the relevant struggles of families with incarcerated loved ones.

In a nutshell, the main character, Jennifer, is faced with a situation she is unsure how to handle. She has been dealing with the ordeal exceptionally well up to this point. She gets into her groove when suddenly she is thrust back into emotional turmoil. Somehow she finds the will to press on despite her husband’s incarceration.

The authors, a mother-daughter duo, were able to craft a story relevant today that portrays the emotional side of the equation while also detailing the issues present for the families and those integrating back into society. I was surprised at how well they captured the pain of dealing with the decisions that arise from such an ordeal. I was also pleased with the elements of forgiveness sprinkled throughout the story.

If you are interested in reading books that fall into Christian Women’s Fiction, I recommend checking out Broken Together. I give it 5 out of 5 stars.

Brenda S. Anderson writes authentic, gritty, life-affirming fiction that shows God at work in people’s messy lives. She enjoys live music and theater, walking the shores of Lake Superior, and sharing hot cocoa with friends and family. She lives near Minneapolis with her newly retired husband. Together, they plan to travel across the United States, checking items off their bucket list, beginning with a bus trip to Niagara Falls.

Readers can learn more about Brenda S. Anderson at www.brendaandersonbooks.com

A former barista, Sarah S. Anderson loves all things coffee, so when her mother asked her to help with a book set in a coffee shop, the answer was an enthusiastic “Yes!” When not creating imaginary coffee shops, Sarah spends much of her time at the theater, either on stage acting, singing, and dancing, or offstage as musical director. She lives near the heart of Minneapolis with her two cuddly kitties.

Why I Wrote Broken Together

Years ago, I watched a late-night interview with a woman who’d fought to free her husband from prison, and she finally won that fight. Near the end of the show, when the interviewer asked how she and her husband were doing now, she replied that they were divorced. It shocked me that she’d fought so hard for him, but then couldn’t hold their marriage together. I knew then that I needed to explore, through fiction, how that could happen.

I’d put off the idea for years, fearing the topic was larger than I could handle, but the story kept pushing its way through.

My daughter, Sarah, and I had often talked about writing a story together, one that would be set in a coffee and cocoa shop, and Broken Together seemed to be the perfect match. As a former barista, Sarah brought the coffee expertise to the story. As a non-coffee drinker, I insisted equal billing for non-coffee beverages.

Then the legal director for the Great Northern Innocence Project graciously offered to walk me through the many the legal hoops someone has to go through to be released once evidence is found.

With her help, I could no longer avoid writing Jenn and Chad’s story. It was a difficult one to write, but it’s also a story filled with hope.

By the Book, January 7

Because I said so — and other adventures in Parenting, January 9

For Him and My Family, January 15

Spoken from the Heart, January 16 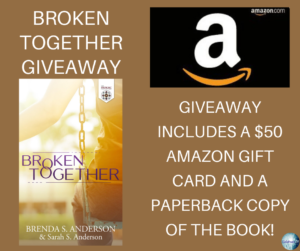 To celebrate their tour, Brenda and Sarah are giving away the grand prize package of a $50 Amazon gift card and a paperback book!!