Falling in love with Benjamin wasn’t in the plan, but Mallory finds she’s all but lost her head and her heart after two and a half years of banter, memories, and now shared books.

But when her ex-fiance (does it count if it was just for a few hours?) shows up right in the middle of a writing project with Benjamin, the guy manages to ruin her happiness… again.

Benjamin has been keeping one tiny part of him back from Mallory–just the one thing that’ll repel her for good.
So when the ex-boyfriend-slash-fiance shows up, and things look serious again, he takes a giant step back and prays he can keep his heart intact in the process.

They’re clearly meant for each other. God obviously has a plan. So what’s it going to take for Mallory and Benjamin to work things out and get those vows made?

You must check out Book, Chapter, & Vows by Chautona Having, especially if you like Christian contemporary romance books. This Breakers Head novel is Chautona Havig’s final book in the Independence Islands Series and is worth the read.

This was the second book I read by Chautona, and I have to say I loved it as much as the first. The story was an easy-going, quick read with lots of surprising twists that kept me glued to every page.

The story gets interesting when a new discovery about Mallory’s uncle Bud is revealed. A surprise to all who knew Bud raises more questions than answers. Mallory and Benjamin find themselves on an exciting quest to learn the truth. The additional time together causes them to grow even closer. At this point, I thought that Mallory and Benjamin were on the fast track to marriage, which I was completely onboard with. Then, out of the blue, Mallory’s ex-fiance, Trevor, shows up and throws a big ole wrench in the works. No! Where did he come from, and why on earth is he here? He is messing everything up, is all I could think as I turned each page.

As always, Chautona does a fantastic job of providing readers with an enjoyable, thought-provoking read. This book reminded me that we are all flawed humans who can do things for the craziest of reasons, and those reasons can hurt others. Sometimes we let our emotions get the best of us. However, if we keep God at the center and trust that He has a plan, things will turn out just as they should.

Overall, I found the book to be fantastic. I give Book, Chapter, & Vows 5 out of 5 stars.

USA Today Bestselling author of Aggie and Past Forward series, Chautona Havig lives in an oxymoron, escapes into imaginary worlds that look startlingly similar to ours and writes the stories that emerge. An irrepressible optimist, Chautona sees everything through a kaleidoscope of It’s a Wonderful Life sprinkled with fairy tales. Find her at chautona.com and say howdy—if you can remember how to spell her name.

I remember the first book I had trouble finishing. Beneath the Cloak. It was the last book of the Wynnewood series, and I was dying to reveal the big secret that had been a big part of the story line. I spent hours writing very few words. Someone asked if I had writer’s block, but I didn’t. I knew every word I wanted to put on that page, but I kept procrastinating.

Finally, I realized a significant part of why I hadn’t finished was because I didn’t want to. I didn’t want the series to end. Say goodbye to beloved characters? Agony, okay? I wanted to spend the rest of my life in Wynnewood seeing what happened with all the characters and all the things that would happen.

I just wanted to write a bunch of other books, too. What can I say? It’s a thing.

So, as I dove into writing the book I’ve been dying to write since I penned the opening scene of Christmas on Breakers Point, you’d think I’d have been prepared for the inevitable. I mean, it’s happened with several other series since that first time, so… yeah. All ready to combat the problem, right? Not hardly.

To be fair, I was also coming off being very sick, my mother being even sicker, so being crazy behind on everything. I mean, that had a lot to do with it taking so long to get going on it. But once I did, I’d type like crazy and then ignore it for a day or two before the story demanded more telling.

Then, just as I neared the big scene of Book, Chapter, & Vows… I went nuts on doing everything but finishing that book. No joke. I did. Sigh. Again, you think I’d learn.

After much soul searching and even more wailing at God about the cruelty of it all (I was in a dramatic mood, okay?), the solution came to me. Okay, God smacked me upside the head with a 2×4 of memories on how I solved every other, “don’t wanna finish this series” crisis.

See, way back with Wynnewood, the only thing that got me to the finish line was a promise I made to myself. “It doesn’t have to end here. You can write more if you want to. There’s nothing to say you can do ‘Wynnewood, the Later Years’ or something like that.”

Just that one promise to myself that I didn’t have to say goodbye was all it took for me to get back on that trusty old Toshiba laptop and pound out those last few chapters.

Now… you’re going to laugh at me. Go ahead. I mean, I did. See here’s the deal. I didn’t have to make that promise to myself again. “What?” you say? “What do you mean?”

Yeah. I don’t have to say goodbye to the characters or the islands. Why? Because we have another island series coming, the Suamalie Islands, and Mallory is going to visit those islands.

If that isn’t enough for me, I have another series all planned for the Independence Islands, too! Yeah. That. I mean, what was I not thinking?

As soon as I thought of that, I was able to get in there, get the last few scenes written and pass it off to the fabulous Christy for her editorial magic. As for me, I think I’m going to go play around just a little bit with one of the Josie Parker Mysteries. I mean, why not?

She Lives To Read, August 12

For Him and My Family, August 15

Because I said so — and other adventures in Parenting, August 20 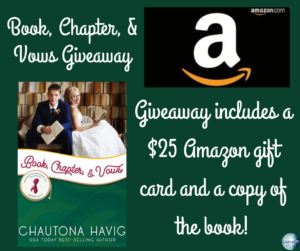 To celebrate her tour, Chautona is giving away the grand prize package of a $25 Amazon gift card and a paperback copy of the book!!